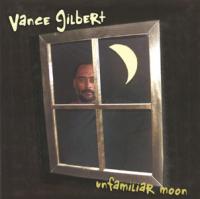 UNFAMILIAR MOON is Vance Gilbert's most mature and realized recording to date. This is his most anticipated album, as it is jam-packed with songs that fall into "that" category of songwriting- the zenith for any writer - songs that elicit the response "You wrote that?" Consider "Ten Thousand Skies", the opening cut, with it's "Roy Orbison looking for Sam Cooke" feel. Follow that with the gentle heartaching in "You Can Go Now", the hurt and hope of the medium rocker "Leaving Avon", and the soulwrenching title cut, "Unfamiliar Moon", Gilbert's most requested song. "Unforgivable"is a jazz vocal tour-de-force that still maintains it acoustic roots with a great surprise soloist. There's a lot of hope and redemption on this album too, in songs like the solo "Your Brighter Day"and the rollicking fun of the unedited "I've Got A Plane". To round out this partial list, Gilbert closes with a haunting revisitation of his acoustic standard "Alone Down Here". A perfect mix of lyrical eloquence and musical accessibility, this is less a recording and more like great performances captured on disc.


Vance Gilbert burst onto the singer/songwriter scene in the early 90's when the buzz started spreading in the folk clubs of Boston about an ex-jazz singer who was knocking 'em dead at open mikes. The word spread of this Philadelphia-area born and raised performer to New York; Shawn Colvin invited Vance Gilbert to be special guest on her Fat City tour. Gilbert took audiences across the country by storm ("With the voice of an angel, the wit of a devil, and the guitar playing of a god, it was enough to earn him that rarity: an encore for an opener" wrote the Fort Worth Star-Telegram in it's review of a show from that tour). Gilbert's three albums for the Rounder/Philo label - EDGEWISE (1994), FUGITIVES (1995), and the celebrated, arrestingly sparse SHAKING OFF GRAVITY (1998)- are all essential additions to the American singer-songwriter collection. With guests as varied as Tuck and Patti, Jonatha Brooke, Patty Larkin, Dee Carstensen, Vinx, and Jane Siberry, all three albums found significant niches on NAC (New Adult Contemporary) and Non-Commercial A3 (Adult Album Alternative) radio. These discs were followed by the selfreleased SOMERVILLE LIVE (2000), his live recording lionized by the Boston Globe as the disc "young songwriters should study the way law students cram for bar exams", and ONE THRU FOURTEEN (2002), a stylistically varied tour de force that New York's Town and Village calls "lively, eclectic, electrifying and transcending." Follow that with SIDE OF THE ROAD (2003), a duo album with Ellis Paul, lauded as "haunting, artful, and lovely" by Boston Magazine and nominated for a 2004 Boston Music Award.


UNFAMILIAR MOON stands as a most impressive cap to this discography. This is Vance Gilbert at his most fearless, timeless, compelling best. These examples of classic songwriting, presented with deep humanism and bravery, stunning artistry and soul, and unbridled joy are inarguably the blue ribbons that tie and seal the seemingly impossibly package that is.............Vance Gilbert