See that up there? I been wrote about!! Hopefully maybe peoples reads it an say “Ohhh honey we gots to go see him somewhere…” Well, here’s some where’s where that can happen:

- Good Good Man - stream on all of your favorite musical services, or you can actually pay my mortgage getting a CD NOW via:
• From CD Baby (that’s where they get that name!!)
• PayPal to - vancefunder@gmail.com
• check for anything between $10 - $20 and up to Vancefunder P.O. Box 17 Arlington, MA 02476
• **If your name is on the CD, you’re a friend, family member, promoter, radio/podcast personage, cash strapped, or anyone else that thinks they should just have one, send me your address and just ask and I’ll send it.**

…is in the books. Cute little festival that, if it had a cheek, I’d pinch it!! Held at a rodeo center (yeehaw and I’m still finding dust in places I didn’t know had places), here were some highlights:

~ Rochelle Riser - did you swallow someone’s dinner bell from heaven? Who sings like that? Good Lord, child….are you ever out of tune?

~ Cari Ray - “Ohhhh I just started playing finger style guitar 4 years ago…..”. Lady please shut up. You were like Leo Kottke in Diane Keaton’s body and face…go over and sit in that insanely over-achieving corner with Rochelle Riser…

~ Seeing Tom PR, Annie, Mike, Reba, Steve & Sherri, Michelle - and talking to you and your new husband about cars

~ The fact that the SouthFloridaFolkFestival is situated right under the flight plan for Ft. Lauderdale International Airport. Most people would complain. Anyone that knows me knows I’m in heaven. Sorry so very not sorry.

~ There’s an old story about Jack Williams that goes like this: Four guys at a bar. One says “I saw the greatest blues player here Tuesday nite”. Next guys says “Well, I was here Wednesday, and there was this guy crushing all finger-style Motown and Jazz standards.”. Third guys says, “Well, Thursday night’s guy played all originals and sang like a broke wing bird.” Fourth guy asks the first three ‘Who’d each y’all see?”

All three say at once “Jack Williams.”

Jack had no voice thanks to some horrid cold, before I closed the evening. So he talked his way through Looking For The Heart Of Saturday Night, sang really not much else, but played the most astonishing set of originals and standards I’ve heard. It was like Tuck Andress, Paul Brady, Joe Pass, and Libba Cotten all had one baby named Jack. I had to follow THAT!

~ And finally, this picture of this man with me? This is Joel Zoss. He played but a 1/2hr set at at the South Florida Folk Fest, and played his song Too Long At The Fair, most notably done by Bonnie Raitt. This song is one of the reasons I do this. Friends laughed at me for being such a fumble-mouthed fanboy💕💕💕. Fine then 😊

Just this week, I saw one guy write that people that called their pets “fur babies” were ludicrous, and that no love could measure up to the love that he had for his young human daughter. I saw another use the Hindenburg flying over NYC and then burning in Lakehurst NJ as contrasting examples of political braggery (yep, made that word up...) and subsequent indignation. Without regard for the fact that despite its Nazi rudder registration, this was a passenger ship and innocent Americans, Swedes, Mexicans, and *children* died in the ensuing inferno. I saw a musician lambasted and reprimanded for being hoity-toity and too-britches-big for needing to use their agent to arrange an upcoming show.

What a platform. Guns can blaze first world problems and ideas from every direction without much repercussion. Like no one sees you pick your nose when you drive, so flick away...But guess what?

I’ve seen people get back in touch after decades of apartness. I’ve seen people I know with no money give to causes they believe in. I’ve seen people not quit Facebook because someone that cared asked them not to. I’ve seen cries for help answered, I’ve read some of the funniest things ever, and I’ve been forwarded some of the best music, airplane, and life stuff ever in the history of my history through Mr. Zuckerberg’s questionable hairstyle.

So sure, quit Facebook if you must for time reasons, politics, mental health, or whatever you need to do. I get it. I just ax you (like kids in my hood long ago used to say...) to find a way to continue to talk and see how different we are not from each other when we really try to talk

Oh, and by-the-way, the first guy mentioned posted later that everyone else needed to get over his curmudgeonly obnoxity (yep, I made that up too) because it was Facebook and, after all, he can do what he wants. My dream come true would be for that daughter, whom he protects and in whom he prides so (yep, used it as a verb), one day look up at him and tell him “Daddy, it does matter to be nice, even if you can’t see them. They’re still just people trying to talk to one another.” 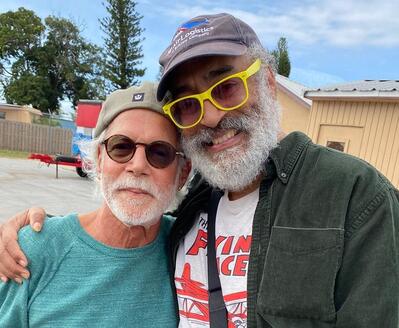