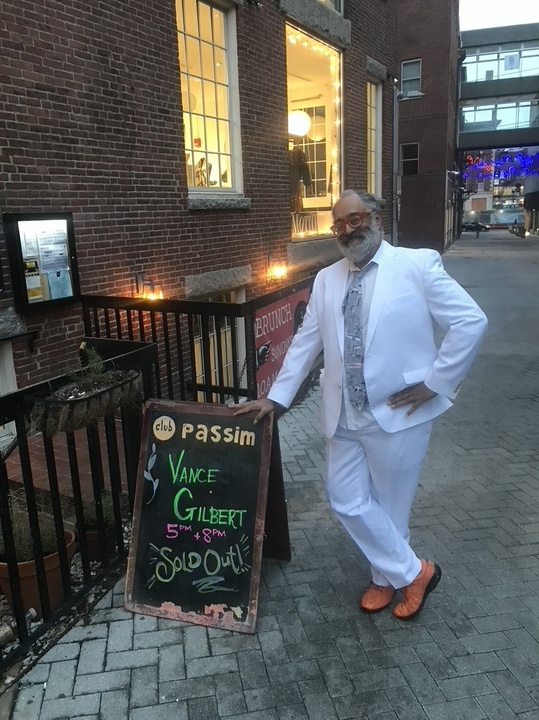 STATE OF THE ALBUM AND CAREER ADDRESS

Look at this, VanceFan! I’m on The Bluegrass Situation:

Thank You. That’s about all I can muster. Look at me and my new found fame - I have to call my manager for permission to talk to myself. Hahahahahahahah!!

Thank you. Well that’s a start. And maybe all I’ve got. Voices Cafe in Connecticut was sold out. Both shows at Club Passim, Cambridge, with the most amazing band I’ve ever been in front of, were sold out. Press has been great enough to consider keeping the press guy, Cary Baker of Conqueroo, on board for another month or two, as he and his team have been unbelievable in getting Good Good Man out to the world. Fingers crossed but I might even end up in a Top Ten list for Rolling Stone.

I can do that because there’s a few thousand bucks left over from your donations to the Good Good Man project. Even after the re-do of www.vancegilbert.com. Lemme thank you for that, particularly for trusting me to do really appropriate stuff with your Vancemoney. I know, I know, many of you said “do what you want with the $$ just deliver a great album”. Thanks for your vote of confidence. I just want to let you know that I’m still plugging away at the "star making machinery behind the popular song…”

Now there’s a management/booking push to have me maybe open for Jason Isbell somewhere, and maybe do The Day Before November on Public Radio’s “Live From Here”. Maybe these things don't happen. Dreams have already come true. Look what I get to for a living. But seriously, if you know either of Jason Isbell’s people or Chris Thile’s folks, lemme know. Better yet, let them know.

- Good Good Man - stream and download on all of your favorite musical services, or you can actually pay my mortgage getting a CD NOW via:
• From CD Baby (that’s where they get that name!!)
• PayPal to - vancefunder@gmail.com
• check for anything between $10 - $20 and up to Vancefunder P.O. Box 17 Arlington, MA 02476
• **If your name is on the CD, you’re a friend, family member, promoter, radio/podcast personage, cash strapped, or anyone else that thinks they should just have one, send me your address and just ask and I’ll send it.**

A HOUSE ON MY RUN

I was feeling like switching it up a bit today, so I took Bessie, our remaining and “different child” Poodle, for a run on a different route. Down the steep hill that is Woodside and the left on Oak Hill. She remembers this run. Off and on for 11 years. And today.

First, about Bessie. She’s black and white harlequin marked - a pretty Party Poodle. She was a rescue that we had every intention of “fostering” as our first foster client, a playmate for Roscoe, and here we were doing such a great thing for the Standard Poodle community. Early on those two would play incessantly, roughly, all bitey-face and snarls. Our luck ran out when we realized that she was aggressive towards every other dog she came across except Roscoe. If smaller dogs are prey, really large dogs like neighbor Karen’s Saint Bernard’s are comically, totally dismissed as horses or camels might be. Any dog size in the middle, any dog in the vicinity, was a fight in the making. We figured that if we gave her up it’s not unlikely that her behavior and history would catch up with her and she’d be...so some tears later, yes on my part, we added this aggressive Battle Poodle to our world. End of our careers as a foster dog house. Beginning of our lives as aggressive dog owners. And yes, we’ve been everywhere to everyone in the Dog Behavior world for her needs, so don’t start with me on rehab, thank you. Aggressive Dog Owner is a label we wear out of necessity.

Tinkerbell was a black and white cat that lived in that medium-brown house, half-way down Oak Hill, about one quarter the way along my run. I’ll never forget the day early in our pet/pet-owner-person relationship when Bessie and I slowed in front of that house during a run. Suddenly this black and white cat charges from around the car in the driveway directly at Bessie, lies in front of her, and rolls onto her back, a plaintive mew, exposing all black, white, and pink.

We’ve all seen the horrible image a freshly road-killed animal can leave in your mind’s eye. And that’s how I prepared. Apology ready for the owner. Explanation ready for the Animal Control officer. Retinal rod cells shifting their receptor cells to the blue part of the spectrum to temper the oncoming red images. Or maybe that’s grey I see, the grey that comes with decision, action, fight, flight. Clawing, blood, snarling, taught leash, pulled arm muscles, hands bitten. I was ready for it all. And I froze.

Bessie nudged her nose into Tinkerbell’s soft, white underbelly, licked her once, looked up at me as if to say “We running or what, Daddy?”, and we kept going. That happened 3 or easily 4 times over the next few years. I guess the take-away is that Tinkerbell wasn’t and would never be never a dog, so...

Tink ended up at some other neighbor’s house some years ago, and stayed there. We haven’t seen her in like 7 or 8 years. Today the door to Tink’s house opened and out stepped one of the boys I recall living there. He took his backpack and slung it into the back seat of the car. I didn’t recall his name, this youngster that shared carpet crawling and caterwauling with Tink. He got into the Honda Civic, into the driver’s side, and drove off down the street. Drove. In that car. Drove off.

I had stopped to initially to let that car back out of the driveway. I realized I had stayed stopped for like 2 minutes. Bessie looked up at me as if to say “We running or what, Daddy?”

Peace and xo to all