Vance’sMondayNightAcousticPajamaParty#61 - Favorite Song From Each Album 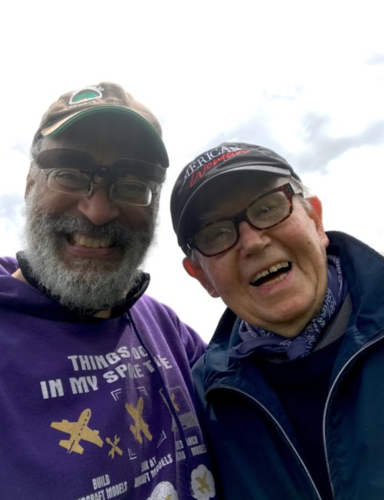 Do you know I released an LP in 1985 called Here I’m Waiting? I’ll start there.

WHO GETS 10%: Boston Public Library Fund - https://www.bpl.org/about-us/support-the-bpl/
Duh! Yeah they get money this week..

Sunday, May 23rd - Ellis Paul Traveling Medicine Show Festival - https://www.tribalmischief.com/traveling-medicine-show-festival  - virtual show with a cast of many plus me!

Good Good Man - the CD - streaming all over, even get a CD from me…

See that guy with me in that picture? This is Domenic. He saved me Sunday.

He’s a fine model plane builder and flyer. He winds up, launches, chases, and times his own wonderful planes. He was the last one to leave the field last Sunday afternoon, where we flew in the howling wind, 3-1/2 hours away from me, in Central NY. He’s an Old White Man, and I adore him. If you’re offended by that, then you don’t know me. That’s ok. Read on if you like.

Just know that he saved me Sunday.

I was driving to fly model planes with a handful of these Old White Men, sure, but first and foremost I was driving because I needed driving.

No offense mostly White people that I’m sure see this post, but I was broken from just being Black in the middle of your and my day. So I was driving.

See, I’m that guy. I’m that gregarious guy. I crack the funny joke about our colors. I’m often the connector. But Sunday I was driving, and I was tired of it all.

Domenic sees me on the flying field, his arms go up in the air, and he shouts “Ahhhhhh Vance!!!” Mask down quick for a pic. Big hug or handshake. He’s full of great stories. He has no idea why he has been gifted with living as long as he has. He says, “I don’t get it. My mother died at 40. My father a decade after that. But here I am." He shrugs. Winds a plane. Launches it. Trots off after it. So do I.

I have no idea of his politics. He’s 95 years old. He loves my building and my flying as much as his own. He thinks I hung the moon. He's closer than most to whenever his last day might be. But on Sunday he gave me one more day of hope and peace as I head towards mine.