Nice one. Thanks Barry for this and for all you do..

WHO GETS 10%: Connecticut College Gift Fund. www.conncoll.edu/giving I went to this socially conscious institution, learned music, got my biology degree. This school gave me so much. So when class president Chip asked me yesterday if I’d consider them as a place to give, I said yes.

Good Good Man - the CD - streaming all over, even get one from me…

PAST - Got together with close model buddies Tom, Clive, Chris and Jack. One is over my house monthly. One I have had Easter with for 15 years. One has rebuilt great portions of this house, one has Parkinson’s. We reminisced, ate badly, talked airplanes, wheeled Jack around to see models flying off of the lake.

PRESENT - Next morning I went model flying. “Vin”, older retired gentleman, new to what we do, approached me and said, “I wonder if you could help me get this to fly… it’d be my dream to have it fly away like some these other fellow’s planes do on this breezy day so I can build something new!!”
We both chuckled.
“Some rite of passage - let’s see if we can just get it to go after a fashion,” says I.
I spent about 1/2 hour reconfiguring his plane, happily explaining what I was doing. Once I was done, he tentatively launched it.
Last I saw was him laughing, trotting after it fruitlessly, as it was now a speck in the sky, surely going from Durham to Meriden, so long goodbye, careful what you wish for, I still hear him laughing.

FUTURE - This is Harry Keshishian. I’ve built and flown models with him since ’86. Terrific modeler. Filled with aero knowledge. Kind. Thinks I sliced the first piece of bread ever. This day we were at a memorial for another my age passed modeler friend. I suggested to Harry that he’s been around so long because he’s Armenian, dark, and that “Black don’t crack”. He says “Well, it is south...”

The future part of this? I can’t wait for Harry’s birthday party on December 30th.
He’ll be 100. 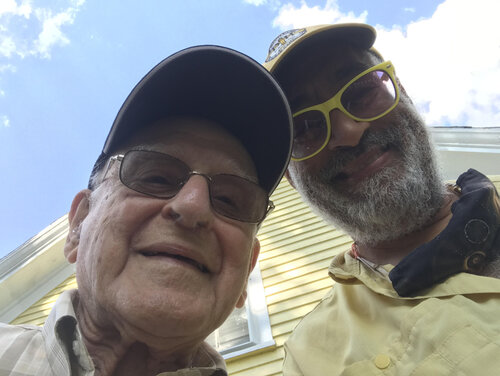